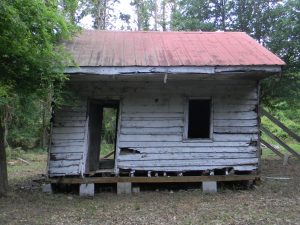 The Point Pines Plantation had become a valuable source for Sea Island cotton By 1850, Sea Island cotton was grown in the coastal eras in the states of South Carolina and Georgia. In the 19th century, southern economy had grown and resulted on the demand of slave labor plantations to increase. By 1850, the south became the Cotton kingdom, cotton had become a valuable crop. Unlike other crops like sugar and tobacco, cotton was a simple crop, slaves were able to produce a wide amount. The Point Pines Slave Cabin is a historical reminder and reason for American economy flourishing, while becoming a main source of cotton around the nation and the world. With the southern states booming with financial success, the northern states used cotton growth to their industrial advantage. The population of enslaved African Americans was at its highest. During this time anti-slavery activist known as the abolitionist fought for slavery to be abolished.  With the westward expansion debate of the new states becoming free, slave states developed conflict between southern slave holders and anti-slavery northerners.

The Cotton Kingdom, the demand for slaves in the Deep South to work in cotton plantations had increased. This had been the effect of the cotton belt, many slaves were sold to work on cotton plantation inland.  In the point Pines Plantation Charles Bailey was the slave owner, a slave named Hannah Chapman witnessed this issue as her father was sold away from her to work in plantation in the Deep South. Enslaved African Americans in Edisto Island developed strong roots of love and togetherness. In the Cabin they found ways to come together, care for on another’s children and support each other. The success of cotton plantations encouraged the south to move their slave economy westward. As news of slavery moving west ward started, abolitionist were against the practice of slavery.  By mid- 19th century tension between north and south on slavery broke out into a civil war in 1861. At the end of the war in 1865, the south had lost the fight. The work towards freedom started with the Emancipation Proclamation signed my President Abraham Lincoln two years before the end of the war, granting enslaved Africans their freedom, unfortunately this did not apply for all enslaved African American. The Emancipation Proclamation only applied to southern states that did not break away from the North, South Carolina was the first state to secede from the union, leaving the enslaved African Americans slaves in Edisto Island to remain in slavery.  A new era had begun after the war, reconstruction of the whole nation was on its way. In 1865 slavery had been abolished throughout the nation. Many African Americans in the south were given land to start their own crops, this was considered share cropping. While many stayed to work on their formal masters plantations for wages to soon buy their own land. In the Point Pines plantation, former slaves were given the land from their master Charles Bailey. For many years African Americans have lived in the cabin from generation to generation. The cabin had been a place for them to be trapped and treated like property to a place where they raised their children as free people.

The importance of bringing the Point Pines slave cabin to the national museum of African American history and culture was to share a period in were slavery was crucial to American society. This three dimensional object would attract the eyes of many people as it represented African Americans contribution as the back bones to the financial stability of America. It’s important to state that the cabin was not behind glass windows like many of the other objects. It’s believed it was shown outside in the open to send a message that African American history is therefore American History. Also the exhibits before it were dark, lights were dim giving a sense of sadness leading to the slave cabin. The cabin was small when observing, the southern weather would have been stifling making it difficult for a human being to live in. The cabin had only one window, oxidized parts of it had fallen apart and considering that it was handmade.  Surrounding the cabin was a cotton gin, which related back to the historical context of the cabin, as it once helped support the south’s cotton kingdom. Enslaved Africans led success of the south, although it was unfair it is true. The cabin symbolizes the working progress to freedom and equal rights of African Americans, as their contributions have been forgotten in history. 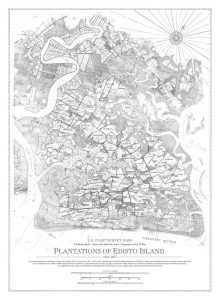