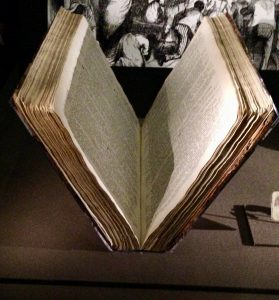 The leather-bound Pulpit bible of Rev. James W.C. Pennington—which derived from a church established in 1819 in Hartford Connecticut, is more than just a bible; it is a symbol.  Although, it symbolizes the importance and the role of Christianity during the Antebellum period (1821-1860), this bible tells a story about a great figure in African American history. Pennington’s bible is a symbol of the obstacles he overcame; going from slavery to freedom, educating himself, and the role he played in fighting for the rights of the free and the enslaved.

In 1840, Pennington became a pastor of the then Talcott Street Congregational Church—now known as the Faith Congregational Church, which also became a school and place for abolitionists to rally(Close). It was the first African American church in Connecticut, and it later became an anti-slavery institution, where it focused its efforts in participating in matters regarding slavery. Pennington and his congregation were active in the Amistad case—this case was about the enslaved Africans, who went to Connecticut for trial after they overthrew their captors aboard the Amistad in 1839; Pennington used his position and in some cases this very bible to encourage and support others, fight for the enslaved and rally for those who couldn’t. These are only a few of so many things that are tantamount to the importance of the bible in relation to this man; Rev. James W.C. Pennington.

Before Pennington became one of the most influential pastors of his time, he had to flee his past circumstance to embrace the future. James W.C. Pennington—originally known as Jim Pembroke, was born into slavery in the state of Maryland in 1807. After experiencing first hand, as well as witnessing the tyranny of slavery throughout his life; he decided to flee his plantation—when he was between the ages of 19-21, leaving his parents and his 11 siblings behind to pursue freedom in Pennsylvania. After escaping, he encountered a Christian woman who initiated his relationship with a family of Quaker abolitionists named William and Phoebe Wright in the state of Pennsylvania(Cummings). They not only taught him how to read and write, but they inspired his pursuit to Christianity, which then lead to him educating himself further by taking classes at Yale. He then moved from Pennsylvania to New York, which thereafter he settled in Connecticut.

Pennington like many ministers of his time, were active members in the abolition of slavery; they believed in the notion of paving the way for their fellow African Americans to be educated and free. Religion was very important, as it was the gate way to freedom, and accessing things and services that weren’t available before, due to slavery or segregation. The churches provided a safe-haven for African American school children and a common ground for abolitionists to meet and stand in unity in fighting and helping each other gain freedom, whether for Pennington himself or family members enslaved in the south.

This unity explains the collaboration of the objects surround Pennington’s pulpit bible at The National Museum of African American History and Culture. From the image of a Sunday church gathering and a document in Arabic to a face vessel and spirit bundle—which had ties to African spiritual practices and an incorporation of Christianity and African tradition respectively; all items within the enclosed glass casing, symbolize the importance of religion to the African American People in gaining freedom. It gave them hope to keep fighting and a cause for justice; it gave them a place to unify and a place to learn. These items are more than artifacts, they are symbols that signify the road to freedom and the struggles they had to overcome to get there. This demonstrates the resilience of religion, despite the opposition faced along the way; like the pages of this bible—which show signs of withstanding the test of time, so is the African American culture, which has endured and risen above the hardship and pain of oppression and slavery. These items signify African American history, which in its totality, enriches American history.