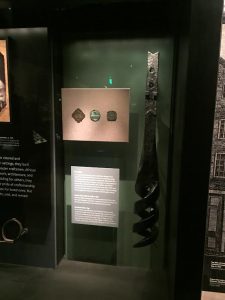 Part 1.
The object is a three-dimensional double helix drill bit. It is dark and its texture is reflective.
It has a combination of fine lines at one end with three circular openings on the flat side, and a comparable large double helix shape at the other end. Its texture appears to be both rough  and smooth. The double helix end has two sharp points. The object has a hard density.
The object is stationary and therefore does not produce a sound. However, because it is a drill bit it may produce a sound while being used.
The object does not have a scent.
Part 2.
The material is steel, maybe carbon steel because of its dark color.
It may be about 2 feet in length or more, and maybe 5 inches wide.
The weight is not clear, it appears to be heavy because of the materials and size.
The object has bilateral symmetry.
It does not have any visible inscriptions.
Part 3.
The object appears to be human made. It doesn’t show signs of decay, nor oxidation. It looks well preserved.
Part 4.
The object appears to be unidirectional.
It appears to have a top and a bottom.
One end is closed, whereas the other end is open. It appears that there may be other tools or parts that may be used in conjunction with this object because there are three holes on the flat end. 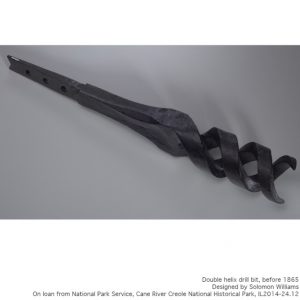 5. The object’s purpose is to drill, perhaps into land for laboring purposes.
6. The object appears to be used for community purpose.
7. My emotional response is admiration for the craftsmanship and skill evident in its composition. I also feel sadness because the object is large, has a sharp edge, looks heavy, and looks like a working tool. I can only imagine how heavy this object is and the climate and work conditions in which it was used.
8. A. A blacksmith by the name of Solomon Williams designed and constructed the object as an enslaved blacksmith.
B. The maker was also the designer
C. It was made in 1820.
D. It was made on the Bermuda Plantation, Cane River, Louisiana.
9. 1. The object was forged by Solomon Williams.
2. It was designed and constructed in 1820 (before 1865).
3. It was most likely utilized on the Bermuda Plantation, Cane River, Louisiana.
10. Possession of the object related to enslaved African Americans. Blacksmiths were revered in their communities for their skill, so there is some prestige and honor attributed to the maker of the object.
11. This object was of great importance to the economy of the United States because the economy heavily relied on slave labor. This object was utilized and created by enslaved people.